Low Cycle Fatigue (LCF) testing provides important information for the design of industrial products in particular for the aerospace, automotive and power generation industries.
It is specific important for situations in which components or portions of components undergo either mechanically or thermally induced cyclic plastic strains that cause failure within relatively few (that is, approximately <105) cycles. Information obtained from strain-controlled fatigue testing may be an important element in the establishment of design criteria to protect against component failure by fatigue. Low Cycle Fatigue data are also useful in the areas of materials research and development, process and quality control, product performance, and failure analysis.

Low Cycle Fatigue Tests are normally run in strain control mode with the load as a dependent variable. ASTM E606 and ISO 12016 specify the standard practice for strain controlled LCF Testing simulating the mechanical loading into the plastic region. In many areas including engine components Low Cycle Fatigue tests are performed at high to ultra-high temperatures under air or in vacuum.

Results of a strain-controlled fatigue test program may be used in the formulation of empirical relationships between the cyclic variables of stress, total strain, plastic strain, and fatigue life. They are commonly used in data correlations such as curves of cyclic stress or strain versus life and cyclic stress versus cyclic plastic strain obtained from hysteresis loops at some fraction (often half) of material life. Examination of the cyclic stress–strain curve and its comparison with monotonic stress–strain curves gives useful information regarding the cyclic stability of a material, for example, whether the values of hardness, yield strength, ultimate strength, strain-hardening exponent, and strength coefficient will increase, decrease, or remain unchanged (that is, whether a material will harden, soften, or be stable) because of cyclic plastic straining.

As the cyclic frequency need not be high, even at 0.5 to 1 Hz, 10E5 cycles can be reached in just over one to two days. In fact, higher frequencies would not be desirable at lower life levels where cyclic plasticity could be significant. Energy dissipation due to rapid cyclic plasticity wold cause considerable and highly undesired, specimen heating, assuming the specimen is not already being heated to an elevated test temperature. Due to this fact LCF Tests can be performed either on electromechanical LFMZ Test Systems or on servohydraulic LFV series. Both solutions provide excellent sample alignment as either the electromechanical spindle drive of the LFMZ series as well as the servohydraulic actuator of the LFV series is in line with the sample, load cell and alignment fixture. 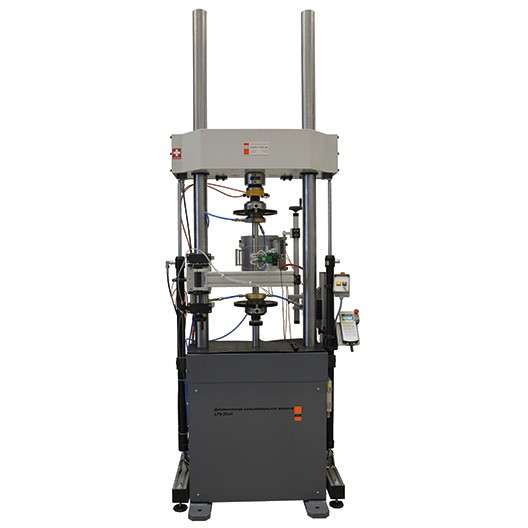