The HKB Long-Term Creep testing machines are used to perform Creep Tests on Cement Based materials.
Creep is a time dependent viscoelastic deformation of a cement based material like concrete under permanent load. Creep can cause additional, time dependent deformations in building components.
When it is needed to subtracting the shrinkage deformations another load-free specimen will be used to measure the shrinkage.
The 4-column HKB Creep Testing Machines enables creep tests to be made by means of a pressure exerted load. Tests can be carried out either on a single specimen or on samples placed in series. The test area height can be adjusted by the adjustable upper crosshead. The initial compression force is applied by the hydraulic cylinder. This cylinder can be put under pressure by simple hand-pump that can be connected to the quick coupling at the testing machine. The pump serves to produce the pressure corresponding to the required test force, as well as to correct (when different loads need to be applied) the force during the long-term test. Any number of machines can be driven by one hand-pump.
The deformation is measured by high-accurate mechanical or electronic deformation measurement unit. This enables very precise control
measurements to be made any time during the tests or when needed permanent during the test with the electronic version and data
acquisition system.
Product Info EN 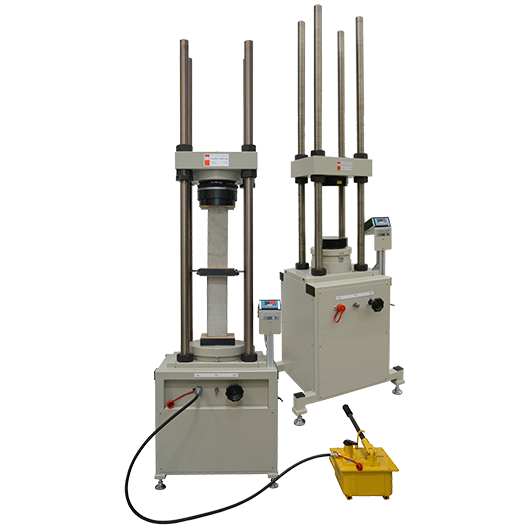